A special video on the theme of stone and shipping culture
“The Changing Seasons - Flowers, Birds, Wind and Moon”

NOBODY KNOWS presents a special video inspired by two components of Japan Heritage in Komatsu City, stone culture and shipping. The symbolic place of Komatsu’s Heritage sites and the seasonal changes within the flow of time are expressed here through Japanese dance and music, using traditional instruments such as kokyu (Japanese violin), flutes (shinobue and nohkan) and hogaku bayashi (traditional Japanese percussion). Through performing arts, we will shed new light on the rich cultural assets of the region.

Screening at the Japan Heritage Summit

Komatsu City, Ishikawa Prefecture, is one of the leading producers of mineral resources in Japan. It has been recognized as a Japan Heritage Site, entitled "The Story of Komatsu's Gems: A Stone Culture Polished in the Flow of Time". 20 million years ago, strong volcanic activity on the side of the island bordering the Japan Sea gave rise to the sacred mountain of Hakusan and, along with it, a land of gem stones including jasper, good quality rock material for construction and rocks used for Kutani ware pottery.

Ornamental beads made of jasper ('Kudatama') were produced during the Yayoi period (4th century BC to mid 3rd century AD) while finely carved bracelets were crafted during the Kofun period (mid 3rd to 7th century AD), fascinating the kings of the time. In the late Edo period (1603-1867), rocks discovered in the Hanasaka area of Komatsu City were used in the development of 'Kutaniyaki', Japan's finest colored porcelain and pottery. During the Meiji period (1868-1912), Kutani ware leapt to fame in the western world and became known as 'Japan Kutani'. Even today, many pottery artists from Japan are gaining worldwide attention combining these traditional techniques with new ideas.

During the Edo period, Kutani wares crafted in Komatsu were shipped to various places on trade boats called Kitamaebune. Ataka, a key shipping point, is also listed as a Japan Heritage Site, under the name of "Kitamaebune Port of Call and Shipowners' Village: A Different Space Spun by the Dreams of Men who Crossed Rough Seas".

NOBODY KNOWS is happy to present a special video inspired by these two components of Japan Heritage: the stone culture of Komatsu and the Kitamaebune ships that spread this culture both within Japan and abroad. The rocks that form the land of Komatsu have been objects of prayer since ancient times. In modern times, some rocks are used as material for construction while others are used for Kutani ware pottery, so these rocks have nurtured a rich culture. The stone culture of Komatsu and the seasonal changes within the flow of time are expressed here through Japanese dance and music, using traditional instruments such as kokyū (Japanese violin), flutes (shinobue and nohkan) and hōgaku bayashi (traditional Japanese percussion).

This special video is set in Natadera Temple, which consists of a rocky mountain, and Ataka Sumiyoshi Shrine, which faces the sea. Both have been places of worship since the Nara period (710-794) and are Japan Heritage sites.

The main hall of the temple is located in a cave in the mountain, which has produced precious stones such as jasper and agate. During the Sengoku period (1467-1615) the temple was frequently destroyed by fire but it was rebuilt in its present form in 1642 by Maeda Toshitsune. One part of the large, undulating precincts around the temple is designated as a national scenic beauty spot, and the study used for the shooting of this video, as well as the three-storey pagoda and the bell tower are all important cultural sites of Japan. The footpaths are covered with beautiful moss and the atmosphere is quiet and peaceful.

From the middle of the Edo period to the Meiji era, Ataka prospered as a port of call for Kitamaebune ships. It was a place where land and sea traffic intersected. It is also the very location where the 'Kanjincho' story, famous in Kabuki, happened. The story of Kanjincho is based on events that took place at the Ataka barrier post when Minamoto no Yoshitsune and Musashibo Benkei were fleeing to Hiraizumi from the pursuers of Minamoto no Yoritomo.

The Ataka Sumiyoshi Shrine in this area is worshipped as a guardian deity for navigational safety and overcoming difficulties. The Ataka Festival, held every year in early September, is said to have originated when fishermen prayed to the gods for the safety of their voyages during this period of rough seas. A highlight of this festival is the Ataka Miyajiishi, a Shishimai (lion dance) inspired by the Kaga Shishi from Tsurugi (Hakusan City) where lion dances are popular. This type of lion dance is characterized by its 'lion fighting', in which various martial arts fighting techniques are used against a large lion's head, including fighting with sticks, naginata (pole weapons), chain sickles and other weapons. In this video, Onoe Ukon tries his hand at the 'stick swing' of the Ataka Miyajishi Preservation Society.

This special video is set in Natadera Temple and Ataka Sumiyoshi Shrine. It expresses a prayer to nature, which nurtures abundant resources, and the revolving four seasons, which have come and gone throughout the ages.

In the prologue, Onoe Ukon holds a jasper stone remembering the ancient culture of stone. The video begins with a prayer scene in a mossy precinct.

In spring, flowers. Elegant sounds remind us of the visit of Emperor Kazan, who named the temple Natadera. From the corridor of the beautiful Kondō Hall, sounds of shinobue (bamboo flute) and kotsuzumi (small hand drum) answer each other. The spring atmosphere is conveyed using a thin fabric called 'Organza' developed by Sun Corona Oda, one of the world's leading textile companies which also has a factory in Komatsu.

In summer, wind. A heroic Shishimai (lion dance) is shooted at the Ataka Sumiyoshi Shrine and on the Ataka seashore. The Ataka Miyajishi (the lion) visits around 600 houses over three days during the Ataka Festival. This tradition was once discontinued but has been revived and given a modern twist. The collaboration scene between Onoe Ukon and the Ataka Miyajishi Preservation Society is also a highlight.

In autumn, the Moon. A solo of the kokyu main piece "Cicada Song" (composed by Yoshizawa Kengyo) in the moonlight. A melody reminiscent of the cry of a cicada is skillfully woven on the kokyu (Japanese violin). The performance takes place in the study of Natadera Temple where Maeda Toshitsune, who rebuilt the temple, spent the last years of his life. Beautiful sounds resonate during long autumn evenings, in memory of Toshitsune who first laid the foundations of the temple.

In winter, birds. A Japanese dance performance by Onoe Ukon, choreographed to evoke swans flying to Komatsu. The music ("Homura", composed by Kiba Daisuke) features kokyu, flutes (shinobue and nohkan) as well as hogaku bayashi, which uses a number of percussion instruments and shouts like 'yo' and 'ho' to add to the music.

the Ataka Miyajiishi, a Shishimai (lion dance) inspired by the Kaga Shishi from Tsurugi (Hakusan City) where lion dances are popular. This type of lion dance is characterized by its 'lion fighting', in which various martial arts fighting techniques are used against a large lion's head, including fighting with sticks, naginata (pole weapons), chain sickles and other weapons. It was revived in 1979 with the reunion of the youth group, but the Shishimai performance from door to door in the town was so tough work, that it was in danger of survival. The current Ataka Miyajishi Preservation Society was established in 1989, and is operated mainly by the youth group alumni. 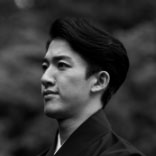 Is the second son of Kiyomoto EnjudayuⅦ, a head family of Kiyomoto school. His great grandfather is Onoe KikugoroⅥ. When he was 7, he debuted as Matsu-mushi in “Bukaku Setsugekka” at Kabuki-za theatre. At the age of 12 he succeeded to the name of Onoe UkonⅡ at “Ninjou Banashi Bunnshichi Mottoi” in Shinbashi Embujo Theater where he played the part of Choubei’s daughter, Ohisa. He succeeded to Kiyomoto Eijudayu in January, 2018. Has been introducing the charm of Japanese traditional arts including Kabuki as a host of NHK radio program “KABUKI TUNE” since 2018. 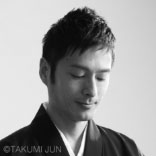 Born on Awaji Island. Studied classical kokyu under Kazuo Hara. At the same time, studied classical kokyu of Kyoto, Osaka, and Tokyo, as well as the style of kokyu playing techniques from various parts of Japan, such as Bunraku, Kaze no Bon, and Owari Manzai. Has been developing the new playing style of these combination, and a four-strings kokyu which has a wide range of low sounds, and its composition, shedding light on the value of kokyu tradition. His performance on NHK World’s “Blends” was broadcasted around the world. Has been active in a wide range of activities including a national tour of the Yoshida Brothers, unit activities with the koto and piano, and also organizes “Cross-cultural String Orchestra” featuring the kokyu, and other stringed instruments from different countries. He also has developed his composition, including “Suite Kojiki” and “Silk Road Suite,” focusing on Japan with world’s traditional instruments. 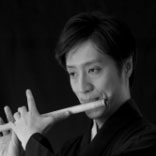 Studied under his grandfather, Tosha Shuho, who was the head of the Tosha school branch flute family, his uncle, Tosha Meisho, and his father, Nakagawa Yoshio. Succeeded to the name “Suiho” in 2004. While he was a student of Tokyo University of the Arts, received Jokan Award, the Dosei-kai Award for new talent, and the Acanthus Music Award. Has appeared in many concerts and broadcasts, including performances sponsored by the National Theatre of Japan and NHK “Nippon-no-Geino”, and has also participated in overseas performances. In addition to his activities in the classical arts, has participated in concerts and recordings of pop artists. A Cultural Exchange Ambassador for Agency for Cultural Affairs in 2020 and 2021. 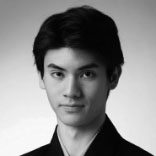 Started playing Japanese drum since early childhood. Masters degree from the Tokyo University of the Arts, faculty of music, department of traditional Japanese music in 2019. While in college, won the Jokan Prize, the Ataka Prize, and the Acanthus Music Prize. Performs in both inside and outside Japan as the musical accompanist such as the performance in “Heisei Nakamura-za Spain performance”, “Modern Noh Abeno Seimei starring Nomura Mansai,” and a lot more. Appeared also in NHK Taiga Drama Series “Naotora” and “Pythagora Switch.”